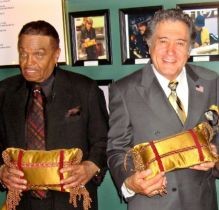 The Golden Pillow award is actually made from fabric of a historic New York City site and fashioned into a clever, interesting and coveted honor bestowed to many entertainers and celebrities. The recent recipients include Joe Jackson and Nelson Sardelli…

On June 28, Nelson Sardelli was one of two Las Vegans to receive the Golden Pillow Award from the International Entertainer School of Las Vegas. The event took place downtown at the supper club Take 1 on Fremont and 7th streets near the Fremont Street Experience in downtown Las Vegas.

Sardelli, a singer, is one of the legendary entertainers who helped make Las Vegas the Entertainment Capital of the World. He is also the president of a fun-spirited club for locals called the F.I.O.R.E. — Fun Italians Organizing Ridiculous Events.

The Golden Pillow is made of the old curtains from New York’s famed Radio City Music Hall. When new curtains were installed in 1987, some of the unique fabric was donated to the non-profit International Entertainers School.

“They must have either run out of true celebrities to honor or they have an enormous amount of gold pillows,” said Sardelli, humbly accepting his Golden Pillow award. He added that he is grateful to be a recipient of such an honor.

Also happy to be honored was Joe Jackson.

“It was a fun night. I enjoyed the food at Take 1, and I like the pillow,” Jackson said.