In an action-packed thriller, albeit a short one between Ricardo Torres and Kendall Holt, Top Rank delivered a night of boxing excitement for more than 3,000 fans at Planet Hollywood’s Theater of the Performing Arts on the Las Vegas Strip. The fight took place on the day after Fourth of July fireworks flew…

Saturday’s Showbox the New Generation is where Top Rank in conjunction with Tecate, presented a hot fight card at Planet Hollywood Resort and Casino. 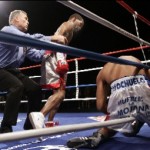 The main fight had Ricardo Torres (32-2-28 KOs) of Canagena, Columbia, came out strong with an overhand right, knocking down Kendall Holt (24-2-13 KOs) of Patterson, N.J. Holt immediately got up and took the 10 count, then proceeded with a left jab to Torres, but got knocked down a second time with his gloves touching the canvass. Holt then again got up and aggressively pursued Torres, executing a right hook, sending Torres to the mat.

Torres was out for over two minutes after hitting the ropes, but the actual knockdown was called at 1:01. Holt’s vision of taking home the WBO Junior Welterweight Belt has become a reality.

“I was laid down, but I got back up. On the second knockdown, I saw it coming, but I couldn’t do anything about it. I wasn’t hurt, I just said to myself, ‘I just gotta let it go,’” Holt said.

Holt, who thanked Torres for the rematch, said the reason he’s so successful in boxing is because of his son.

When asked if he would grant Torres a rematch, he said that it’s up to the promoters.

There was a super lightweight 10-round bout between Lamont Peterson (25-0-12 KOs) of Washington, D.C., and Rogelio Castaneda (25-14-3-8 KOs) of Sacramento, Calif. It was a non-stop action fight that showed Peterson ahead on every card. He is a strong fighter who uses his left jab with some outstanding uppercuts and body shots, and he was the aggressor against Casteneda.

In the later rounds, Casteneda scored some heavy body shots to Peterson’s midsection but couldn’t match his speed or power. Peterson scored a knockout in 2:50 of the ninth round. 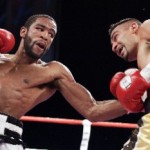 Gonzalez, who is signed to Top Rank, is an aggressive fighter and quick with his hands. He was definitely the more accurate of the two and more effective in punches executed. Gonzalez won by unanimous decision. The scorecards read 60-54 in favor of Gonzalez by Judge Ricardo Ocasio and 59-55 favoring Gonzalez by judges C.J. Ross and Paul Smith.

Another fight that had fans surprised was a six-round, middleweight bout between Josiah Judah (10-1-1-2 KOs) of Brooklyn, N.Y., and Don Mouton (5-2-1-4 KOs) of Houston, Texas. Mouton came out strong with overhand rights and lefts and knocked out Judah in 1:42 of the first round. 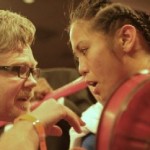 There was also a six-round, super bantamweight fight between female fighters Johanna Mendez (3-0-1) of Houston, Texas, and Luciana “Ana” Julaton (4-0-1 KO) aka “The Hurricane” of Daly City, Calif.

Julaton is trained by Freddie Roach. Both fighters displayed some great boxing skills: Julaton in the earlier rounds; Mendez in the later ones. The judges ruled it a draw.

Cansio, 19, had Vinan in trouble in the fifth round but couldn’t take him out. Vinan, 28, wasn’t very effective in the earlier rounds but did score more heavily in the later ones. The scorecards read 56-57 in favor of Vinan by judges Lisa Jiampa and Dave Moretti. Judge C.J. Ross scored it 57-57, resulting in a majority decision for Vinan.

Franco, who has an awkward style of fighting — a sort of lanky, hunched stance — received his share of blows from Lagos. In fact, the blows from Lagos did not all fully connect and lacked any major power, but there was plenty of action. Franco won by unanimous decision. Judge Bill Graham scored it 59-53, and judges Lisa Jiampa and Dick Houck had it 59-54.

Joseph Judah (2-0-0) of Brooklyn, N.Y., another member of the fighting family, proudly won a four-round, super welterweight bout by unanimous decision over Luis Tapia, who made his pro debut from Los Angeles, Calif. All judges scored for Judah as follows: Lisa Jiampa and Paul Smith, 39-37; C.J. Ross, 40-36.