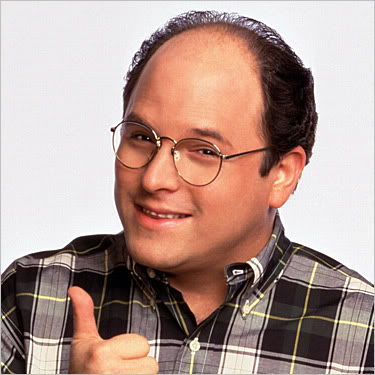 Jason Alexander aka George Costanza performs a one man comedy act at Planet Hollywood through March 14. The audience is part of the Donny Clay Experience motivational seminar. Donny Clay has The Way. He just wants you to know you, to let the you inside of you out of you. You’re perfect just the way you are, no matter how lousy that is, and since you’ve obviously hit bottom by paying good money to get into his show in a desperate, last ditch effort to improve your life, he’ll help you.
Ever since Donny was a little boy, he’s been gifted with The Answer. To almost every question. Can’t stand your kids, other relatives, job, boss, neighbor? Get a gun. Hate your wife? Get a divorce. Here are four words to guide you in making more money. Get-a-second-job.
Worried about your health? Diet and exercise. For diet, Donny employs a string diet. This involves tying a string to everything you eat, then pulling it our of your mouth before you can eat it. Exercise? Try, um, exercising with yourself, if you know what I mean, to a healthier, happier you.
Commitment? You don’t even want to know.
Discomfort is good. Especially when Donny is wearing a flesh colored body suit with a codpiece. And extolling the virtues of remaining together using an old married couple from the audience.
With answers like these, who needs Dr. Phil, Tony Robbins, Oprah or Richard Simmons? Obviously not the celebrities like Ray Romano and Kirk Douglas, whose negative endorsements described how knowing Donny showed them what not to do and motivated them to do anything to get rid of him.
The concept for the show originated from a short lived sitcom that Alexander had called Bob Patterson about the life of a motivational speaker. He just took the show and incorporated an actual training session into the script.
The audience laughed through the entire show. And learned something about themselves.