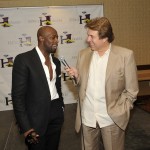 For six years, top-billed celebrities have been on stage not to receive awards but to give them out to deserving, unsung heroes from communities nationwide. Steve Harvey’s 2008 Hoodie Awards was held in Las Vegas for the second year in a row at the Orleans Arena in September… 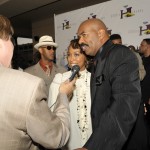 The sixth annual Steve Harvey’s 2008 Hoodie Awards, held at the Orleans Arena in Las Vegas, was another example of what celebrities can do when they turn on the spotlight and give their support for everyday people who work in communities across the nation.

Hoodie Awards are presented to outstanding community-based leaders and entrepreneurs throughout the country. Recipients come from churches, businesses and civic leadership programs. Schools, organizations and other institutions also receive awards for their service and excellence in their respective neighborhoods.

“There isn’t any awards show that recognizes Black businesses throughout the United States. The Hoodies are going on the sixth year, and it’s the only show where celebrities give out awards to folks in the community,” said Harvey.

Joe spoke with me about the music business overall. Although he didn’t offer any specific answers on how to break in to the business, he offered an inspirational message: “Don’t let anyone stop you from what you believe in. And keep working on it until you perfect it.”

Gospel artist Kirk Franklin commented on how to handle stress: “Prayer is the most powerful thing, through God, which can give us the strength to handle the stress.”
Harvey is the host of a nationally syndicated radio talk show, “The Steve Harvey Morning Show.” In addition, Harvey goes beyond his entertainment field credits with his recently launched line of men’s fine suits, jewelry and other accessories and attire. The Steve Harvey Collection is sold at Burlington Coat Factory and other outlets across the country.

In an effort to encourage more Black youth and other disadvantaged groups that make up a large part of the “Digital Divide” to use computers, the voting is done online in the weeks leading up to Hoodie Awards show.

The award winners were chosen by their communities and the general public. Among this year’s Hoodie Award recipients are: Mama Nems’ was voted the Best Dessert Orlando, Fla.; Raphael Johnson of Detroit, Mich., a motivational speaker and author named the Best Community Leader for his work with youth and young adults in urban areas. Best Soul Food went to Sadie’s, renown for its long history of serving delicious home-style and Southern-theme dishes, as well as being a social meeting spot. Philadelphia-based Enon Tabernacle Baptist Church was Best Church Choir.

For more information on the awards show, Harvey’s design line and his entertainment endeavors, visit www.steveharvey.com.