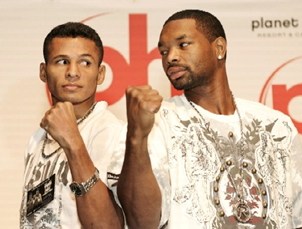 Even for two fighters each set to take the other out, Ricardo Torres of South America and Kendall Holt of the USA showed respect for each other as they fielded pre-fight questions from the press in Las Vegas at Planet Hollywood… 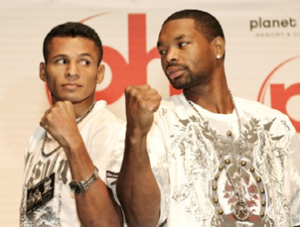 The last fight between Torres and Holt was tough. Holt was ahead in the earlier card, knocking down Torres with a left-right combination in the sixth round. Torres got up, and continued fighting but wasn’t ahead on the scorecards from the sixth to the ninth rounds. In the 10th, he scored a winning round, and in the 11th executed a left hook that sent Holt to the mat.

Holt got up, but Torres delivered a combination of punches that had the referee stop the fight in 2:24 of the 11th round. Anything can happen in the sport of boxing. Torres and Holt are two tough fighters and will be in a definite war that will have fans on the edges of their seats.

“He’s a tough fighter. The last fight he definitely hurt me in the sixth. He caught me real well, but I got up and fought,” Torres said, adding, “I knew I was behind on the scorecard, so I went for the knockout.”

Torres says that this fight will be a much better fight.

Holt said that he’s in better shape and will be pushing the fight.

“July Fourth will be a big bang in Las Vegas, but on July 5, I’m taking the title home with me.”

Also included on the fight card is a special 10-round Junior Welterweight attraction between Lamont Peterson (24-0-11 KOs) of Washington, D.C., takes on Rogelio Castaneda (24-13-3-8 KOs) of Tijuana , Mexico.