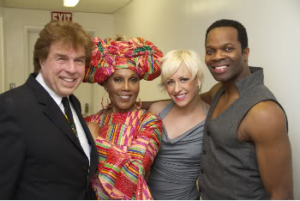 With all the variety of foods offered in Los Angeles, one restaurant which attracts The Los Angeles Lakers is Veronica’s Kitchen at 528 West Manchester in Inglewood. Veronica Ogbeide, the owner specializes in West African Cuisine. Serving the community for 20 years, Veronica’s Kitchen is a cozy-earthy setting which also attracts an eclectic set of people.
Some popular dishes include bean soup, oghono, equsi and fish and goat soup. Many of the dishes of West Africa include chicken, goat, dry fish and cow leg. My dish was pounded yam amada with Jallof rice and eba. The dishes are spicy and can be prepared on the lighter side for those who don’t enjoy spicy foods.” My food is universal. It’s close to your Mommies cooking” states Veronica. As Veronica admits, the closet way to a mans heart is a woman’s cooking.Veronica’s Kitchen caters for large and small functions.

Their second location is at 15355 Sherman Way in Van Nuys. For more information call [310] 673-4890 or [818] 781-3015. Veronica recently catered a function for The African Goodwill Awards which honored Janet Dubois and Jim Brown for their work in the community of Los Angeles. A wonderful individual who exudes positive energy, Veronica will greet you with open arms, and make you and your family feel right at home. Be sure and tell her Pete sent you.