Carmelita Pittman, founded The Rose Breast Cancer Society, a 501.c3 non-profit organization as a Living Memorial for her multi-talented and devoted mother Juanita Zara Espinosa Uddin, who loved roses and whose life was cut short following her four year battle with breast cancer. The Rose Breast Cancer Society has produced the Annual Rose Variety Arts Show for the past twelve years and is a combination of an Art Expo, Wellness Expo and Variety Stage Show which honors a Mother of the Year. The event has served as a platform to introduce Infrared Thermography , a life saving painless, radiation free, FDA approved, breast cancer screening examination which can predict the presence of breast cancer up to ten years BEFORE a lump can form. The Rose Breast Cancer Society stresses education to promote wellness and prevention and is an arts based organization. “Breast cancer is an equal opportunity disease which cuts across all lines and genders. However, there is hope to stop it before it strikes.” states Ms. Pittman. For more information visit www.rosebreastcancersociety.org 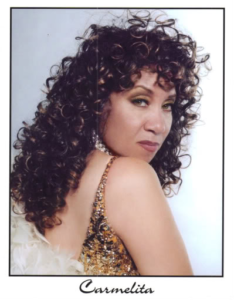 A former L.A. Unified School District art educator and U.S.C. and Pepperdine graduate, Carmelita Pittman who is a recording and performing artist is known as Carmelita. She has amassed several credits including various appearances on stage and screen. In 1985 she was known as Ms. C. Rappin’ Pittman ( the Rapping School Teacher) when she took half of her class into the recording studio and produced “The School of Cool” with Michael Wycoff , an RCA recording artist. The song hit the charts resulting with the appearance of she and her students on television and radio as well as a local parade. June 2001 at the invitation of the Godfather of Soul James Brown she performed at the Greek Theatre with her students from Inglewood “Opportunity” School along with a group of youngsters from the valley . Before this transpired her husband Jerry Pittman, produced her single entitled “Isn’t it Lonely” and “Rosebud” on Carmen Records which now is considered a rare collectible fetching sums of $1,000 and up per vinyl single in Northern England, Scotland, Japan and Australia. The single originally made the charts with James Brown and other noted recording artists in 1974.
The rare single can be heard on youtube Carmelita/Isnt it Lonely and Carmelita/ Rosebud. also on youtube is
Ms C Rappin Pittman/ The School of Cool. Isn’t it Lonely is available on Ubiquity Records on the compilation entitled California Soul Volume II and can be ordered at www.ubiquityrecords.com . Carmelita has also recently joined the cast of “Rockin’ with the Ages”, an upbeat rollicking musical revue featuring talented seniors produced by The Pink Lady a.k.a. Jackie Goldberg. The Pink Lady says “Get Up, Get Out and Get a Life ” and believes as Carmelita does that age is nothing more than a number. The musical will run May -June at the Whitefire Theatre in Sherman Oaks, CA for more info: email therosebcs@sbcglobal.net