Pacquiao Overwhelms Cotto and Gets TKO By: Pete Allman 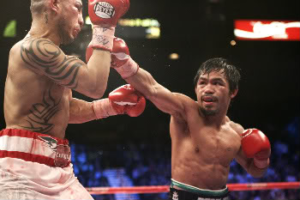 Manny Pacquiao proved once again, that speed conquers in the ring, as
the young Filipino idol out boxed Miguel Cotto on Saturday at The MGM
Grand Garden Arena. Pacquiao- whose early-on basketball and martial arts skills helped him in his boxing career-
envisioned Cotto coming out strong in the early rounds. It didn’t take long though for Pacquiao to strategize
his combinations to execute those power punches, knocking Cotto down in the third and again in the fourth round. He repeatedly overwhelmed the powerful but slow Cotto, garnering him the World Boxing Title
Organization Belt. 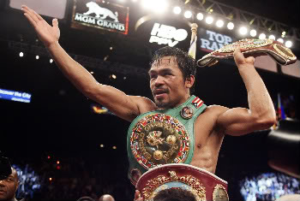 In the twelfth round, referee Kenny Bayless stepped in between the two fighters and stopped the fight in fifty five
seconds of round twelve. Pacquiao, through his speed and power doubled the number of punches compared to Cotto’s. It was all Cotto could do stop Pacquiao’s ongoing barrage of punches. In fact, in the eleventh round Pacquiao
almost stopped Cotto, when Cotto’s trainer, Joe Santiago walked into the ring apron and waved his hand to Bayless to stop the fight. But Bayless and the ringside physician Jame Garne allowed the fight to continue. After the announcement of Pacquiao as the victor, the capacity filled arena of boxing fans started chanting ” We want Floyd”

That looks promising for next year when Floyd Mayweather Jr. said ” I want to take boxing to the next level.”

The Pacquiao versus Cotto championship fight has added another
chapter in the history of boxing. Pacquiao thus far, is the only fighter to
have won seven titles in seven different weight categories. 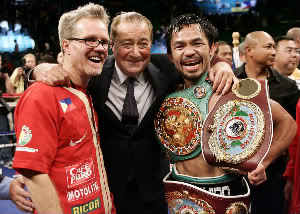