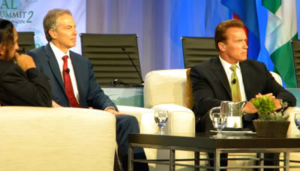 On Friday Oct. 2, 2009 Governor Arnold Schwarzenegger and the United Nations met with 30 global leaders in L. A. to sign a declaration, committing to work as a team in pursuance of a cleaner planet and improving the nation’s economy by reducing greenhouse emissions.
“Addressing the problems caused by climate change is the greatest environmental challenge of our time and at this summit we heard leaders and experts from around the globe discuss the innovative steps and strategies being championed in the fight against global warming,” said Governor Schwarzenegger. “We have deepened our partnerships and renewed our commitment to work collaboratively to reduce greenhouse gas emissions and create a cleaner planet and stronger economy for the next generation. In signing this declaration we are sending a powerful message to the national leaders negotiating the next global climate agreement that we are ready for action. The time to act is now.”

Global warming has undoubtedly become one of our nations largest concerns. Next month Governor Schwarzenegger will be traveling to Copenhagen to discuss “the summitt” with the U.N. He will be speaking to officials on behalf of all the regions that were present at the Global Climate Summitt.

Many nations have collaberated in making improvements regarding global warming. Governor Schwarzenegger met with several nations last year and made these comments regarding recent accomplishments:

“And I’m proud of what we have accomplished so far, so I say we need to celebrate here a little bit and pat ourselves on the back, because just think about it. We just met last year and since the last meeting:

• Indonesia, Brazil and Mexico have created an action plan to protect our rainforests.

• China has already announced that it will build the largest solar project in the world. Mexico has pledged that it will cut greenhouse gas emissions by 50 million tons by the year 2012.

• Countries such as Algeria and Senegal and Uruguay are taking action by reaching out and partnering with us.

• And Europe, of course, is leading the way in creating carbon markets and we are all studying their successes.

The closing ceremony of the Governors’ Global Climate Summitt 2 ended in the signing of perhaps one of the most important documents in years. The Global Climate Summitt clearly showed what local and state governments can accomplish when collaborating as a team. Addressing climate change has been a concern for years.
The summit concluded that there definite solutions to the growing climate challenge. The United Nations Development Program (UNDP) is working with national governments to implement a plan for low carbon and a stronger economy, eliminating poverty all together.

For more information, or to view web casting of all events, go to www.governorsglobalclimatesummit.org.