Las Vegas Strip headline magician Dixie Dooley had just received a City of Las Vegas Proclamation, making November 13 Dixie Dooley Day. I was pleased to present the award to him on behalf of Mayor Oscar Goodman.

Dooley, known as “The Magic Mystifier,” has done a lot of community work using his talents to perform for children at Safe House and for various other charities. Dixie Dooley, Master MystifierHe has been recognized for his celebration of the magic of Houdini, which he has presented for over 30 years in Las Vegas.

While they were getting ready to tape Tony’s radio show, the host asked me to join them on-air, which I thought was very nice. It was a well-paced show, and it included another guest entertainer, author Martin Andrew, who performs a tribute to Rod Stewart.

During the show, Tony spoke about the responsibility of the interviewer to the interviewee and the audience. Tony likes to dig deep, bringing out the best in the discussion, which he feels makes it a more interesting segment. In fact, he and I both like to do inspirational interviews that bring out positive messages about the celebrities and guests we speak with, which helps to motivate and uplift our audiences. Thanks, Tony, for your honesty and compassion.

I would be remiss if I didn’t tell you to stop by Josette’s Bistro, west of the Strip, and check out Tony Sacca the singer doing some great standards, Doo Wop and those nostalgic songs, such as those made popular by Sinatra and Bobby Darin, as well as Louis Armstrong’s songs. 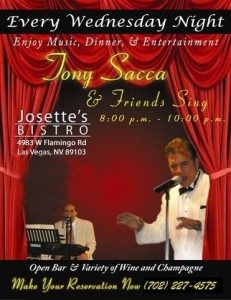 Tony sings from the heart, and he started his singing career along with his brother in Philadelphia. And be sure to catch his Christmas show, which is taped at Josette’s Bistro, featuring Tony and friends.

Tony’s TV show airs on Cable 14, Channel 25 in the Las Vegas area, as well as in other Southern Nevada cities, and it is also aired via Direct TV and Dish Network in Southern California and beyond (check your local listings for times and channels). Tony Sacca’s broadcasts reach millions of listeners and viewers. For television and radio show information, contact his representative, Madeline, at (702) 364-8669.