A sculpture of a wild horse made from a tree charred by savage California wildfires symbolizes the hope for our nation that it, too, will rise from current socioeconomic troubles to regain prosperity and success. Phoenix, the Freedom Horse by Alexandre “Sasha” Safonov educates, motivates and captivates onlookers…

Alexandre “Sasha” Safonov, renown for his wood and bronze sculptures sought by collectors worldwide, has completed Phoenix, the Freedom Horse, a 16-foot-high, 1,500-pound masterpiece with a message behind its name. The raw material for this fine work of art comes from a humble, unusual source with a story that motivates. 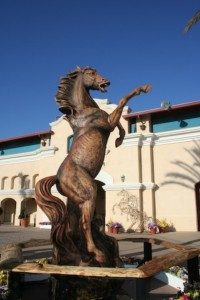 Safonov, originally from Russia, recently relocated to San Diego where he found a large tree that was badly burned from the widespread 2003 Cedar Fires in the horse country of Southern California’s Cuyamaca Mountains.

From a massive, salvaged log — one that had been scheduled for destruction — the artist felt inspired to sculpt a horse, rising on its hind legs. Beyond Safonov’s natural artistic urge, he says he felt obligated to show respect for the tragedy and to “show what can come from ashes.”

“I took six months to sculpt this magnificent piece of art. Phoenix, the Freedom Horse represents ashes to a new beginning. And in our times, it represents coming back from economic crisis to success and prosperity,” the artist stated.

“I want to inspire people of this great nation. I believe in the American dream,” Safonov added.
Safonov believes in the strength of human spirit in times of adversity, and he encourages people to act on their beliefs and convictions. The artist did just that, fulfilling his vision for the great Phoenix, the Freedom Horse to carry his powerful, positive message for the masses. 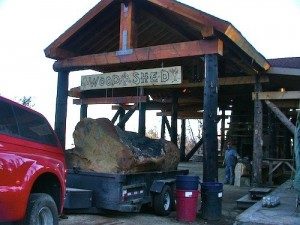 The wood sculpture depicts a regal, wild horse with his hooves in an elegant forward position as he stands valiantly atop a stone-like shape with a flourishing tree carved upon it like an emblem, which most likely commemorates the mountains’ comeback. It is a fitting tribute to the previously dense forest, wildlife-rich area that, in the manner of the metaphorical phoenix rising, is regaining its own lush, vibrant foliage.

“You can fight. You can fight with your problems in life. You can be like this horse,” Safonov states in his online video as he passionately describes his creation.

“I have to do it. I want to do it. I feel the spirit just touching my heart,” he said while sharing his views on the historic significance of the burned-out area, its ecological importance and its recreational value to residents and visitors. 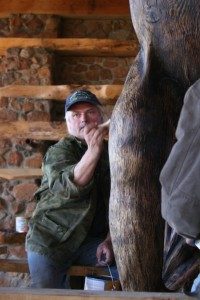 In addition to holding its aesthetic value as fine art, inspiring viewers to overcome adversities and encouraging preservation of natural resources, the life-like horse sculpture is serving also as a conversation catalyst for families, youth groups and educators to raise awareness and action about a major environmental issue — the far-reaching impact of wildfires.

Phoenix, the Freedom Horse was exhibited recently at the Del Mar Racetrack in San Diego where it drew thousands of admirers of all ages. It will be placed on exhibit next in Los Angeles and Las Vegas. Limited edition, bronze replica sculptures will be available to the public. 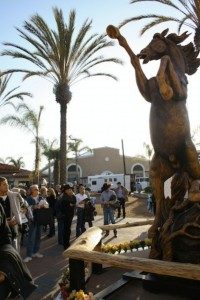 Visit the online photo gallery at www.sashasart.com to view Phoenix, the Freedom Horse, exhibit photos and other selections by sculptor Safonov, who has worked over 25 years at his craft.