New IBF welterweight champion, Joshua Clottey, says nobody hurts him in his fights, and that proved correct in his unanimous victory over the skillful Zab Judah, who couldn’t win it against the strong stance of Clottey… 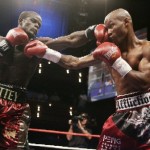 Joshua Clottey executed strong body shots and head shots to Zab Judah, while he demonstrated great speed and combination shots in a fight held at the Pearl Concert Theater at the Palms Hotel and Casino in Las Vegas, Nev.

Clottey (35-2, 21 KOs) originally from Accra, Ghana, fighting out of Bronx, N.Y., proved to be the stronger of the two fighters, breaking through his opponent’s defense. Judah, (37-6, 25 KOs) from Brownsville, N.Y., is a great counter puncher and a southpaw.

It was a touch-and-go fight in the first three rounds, with a turning point for Clottey in rounds four, five and seven. In the ninth round, Clottey caught Judah with a left uppercut to open a gash above Judah’s right eye, about a 2-inch cut. 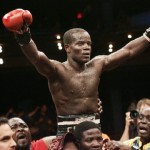 Referee Robert Byrd, took him to the corner for examination by Dr. James Gane, the ringside physician who stopped the fight at 1:22 of the ninth round.

The first complaint from Judah’s training camp was that he wasn’t asked if he wanted to continue. A related controversy surrounded what was believed to be a head butt that caused the cut. 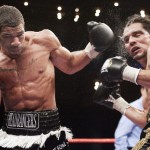 Gane, stated: “I gave him [Judah] a visual check three different times.” Gane said Judah could not count the correct number of fingers the doctor held up. “I had to believe him that he indeed couldn’t see,” Gane said, adding, “The reason he couldn’t see had nothing to do with the cut. I removed the blood and [he said] he still couldn’t see.”

The other controversy was in how the fight was scored, which showed Judah winning round eight on Judge George Hill’s and Glenn Trowbridge’s cards, but Duane Ford had scored it for Clottey. According to some observers, it should have been a draw.

In a press conference following the match, Judah stated: “I thought I was wining the fight, but I was disappointed,” Judah expressed his dismay with Duane Ford for scoring the eighth round for Clottey. “I didn’t want him as a judge.”

Judah complained about the scoring and said he won. “Definitely. …The whole arena believes that I won this fight. …”

There was initial disagreement among onlookers and sportscasters as to if or when a head butt occurred. If so, it was undoubtedly accidental, but Judah indicated right after the fight that he thought it was no accident.

Judah’s father, Yoel Judah, later stated at the press conference: “It was a good fight, but you don’t take a fight on a head butt,” he continued. “It happened early in the fight. We’ll push for a rematch.”

Zab Judah had previously commented in the ring: “We talked about this over and over and over again. He [Clottey] got disqualified in previous fights for head butts. It happened again.”

“He blocks with his hands, so I wasn’t able to get through.”

Judah also said right after the fight that Clottey was guilty of “holding me, hitting me in my kidneys…”

Clottey stated ringside, “You know, I didn’t think that it was a head butt. I threw a right hand.”

The fact the Judah had blood coming down his face going into the ninth round certainly could have put him at a psychological disadvantage. One trainer was overheard saying that Judah’s cut man didn’t do a good job.

Clottey was pleased with the outcome, and stated in the ring, “The fight was very tough.” He added, “He never hurt me. In my boxing life, nobody hurts me.”

A humble Clottey thanked promoter Bob Arum of Top Rank for giving him a chance.

When asked what would have happened if the fight had gone 12 rounds, Clottey stated, “I would have pushed him.”

Judah wants a rematch and Clottey said he would grant that. Furthermore, even if he had to relinquish his IBF belt to fight his next target opponent, Antonio Margarito, he would.

“If Top Rank wanted me to do that, I would,” said Clottey.

If for any reason he can’t fight Margarito again, he said Andre Berto would be his next choice.

Both fighters have a heart and passion for boxing. There is no question that Clottey is a hard hitter and was the aggressor in this fight. Although Judah has the speed and executes well, Clottey’s force is brutally punishing to any fighter.

Before the main event, there were four undercard matches. The best of them had Anthony Peterson (28-0, 19 KOs) of Washington, D.C., taking on Javier Jauregui (54-15-2, 36 KOs) from Guadalajara, Mexico, in a 10-round lightweight bout.

Peterson had the upper hand with explosive left-hand punches to the body and a strong right. The judges’ scorecards were unanimous for Peterson, showing 99-91 by C.J. Ross and 100-90 by Dave Moretti and Robert Hoyle.