On this occasion, Talya Letejian, Varet, her dad, and her brother Lucus greeted my guests, Tom Hallick, and Yin Jiang.

The first thing Tom Hallick said was, “this is neat, like the old west, and they even got a pool table.” Tom should know, he’s traveled practically everywhere in the world and as an actor has enjoyed many western settings. His wife Yin Jiang, a concert violinist with Andrea Bocelli, is originally from China, and found Tin Horn Flats to be a fun place.

The first thing on the menu was fried pickles, which were delicious. That was a good start, especially in combination with a Stella beer.

The real kicker though, was the sweet potato fries and Buffalo wings. According to Hallick, they’re better than the Chicago style wings, which is where Buffalo wings became popular.

Our main course was a ribeye for Tom, a filet for Yin and a blackened salmon for me. Each dish was cooked just right, and served with healthy portions. Tom had to take home part of his rib eye.

Tin Horn Flats Saloon and Grill is a family business that treats their customers like family. They’re located at 2623 Magnolia Boulevard in Burbank. Hours of operation are 10:30 am until Midnight.

The Tinhorn Flats Saloon & Grill has a history in Burbank since 1939. Everyone loves the country swinging saloon doors. 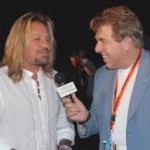