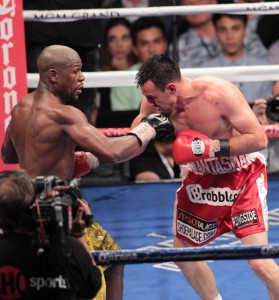 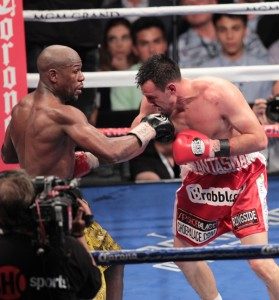 Floyd ”Money” Mayweather 44-0-0,[26 KO’s] had no trouble whatsoever proving he’s still the best fighter on the boxing circuit, beating out Robert ”The Ghost” Guerrero, 32- 2-, [18ko’S] by a unanimous decision. He proved by defending his World Boxing Council Title in a 12 round Championship fight, held at the MGM Grand Garden on May 4TH, that his one year lay off didn’t slow his reflexes down at all.From the time Jimmy Lemon announced the fight, Mayweather looked the part and performed the part of a great champion. Every round showedMayweather as an elusive, yet quick fighter who could easily score with his lightning fast right and connect while he bobbed and weaved out of Guerrero’s punches. Robert Byrd, the referee during the course of this fight had no problem breaking up both fighters in the tie ups. Mayweather also showed that he could trade punches with Guerrero and also used his left jab effectively during the course of the fight.60% of the power punches were landed by Mayweather compared to Guerrero’s 19%.When asked about his training, Mayweather gave the credit to his Dad, Floyd Mayweather Sr. and his team. The Eight-Time, Five-Division World Champion is almost the highest paid athlete with his six fight deal with Showtime. Altogether with Pay per view revenues, he could go over 250 million dollars on this deal. That’s if the marketing is promoted right and he keeps his WBC Title.

The WBC Featherweight World Championship had Daniel DE Leon 45-5[35KO’s]lose his title to two division world champion Abner Mares 26-0-1[14KO’s] who is now the WBC Welterweight Champion of the World. Mares performed exceptionally well, and was clearly delivered the more accurate punches to Ponce de Leon, knocking him down twice with a right, then a left in round 2, continuing to score, until the 9Th round where he finished off DE Leon by way of technical knockout in 2:20 of round 10.
Former Bantamweight Champion, Leo Santo Cruz, 24-0-1 [14KO’s] scored consecutively against WBA super flyweight champion Alexander Munoz 36-5 [28KO’s] throughout the first 4 rounds, then knocking out Munoz with a right in 1:05 of the 5th round.

J’Leon Love 16-0 [18KO’s] almost lost his IBF title to Robert Rosodo 21-7[13KO’s] for the vacancy NABF Middleweight Title.Rosado, the stronger punch
er, caught Love with a right at the end of round 6 and also knocked him down in 9th.Al Bernstein, one of the commentators for Showtime and his associates all thought Rosado won the fight, but the judges saw it differently.