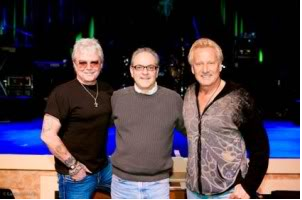 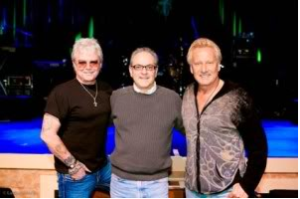 The Multi-Faceted Executive Worked With Legendary

In the nearly 35 years since Ted Joseph began his incredibly diverse 21-year-stint at Warner Bros. Records, the industry has evolved from a corporate-centered culture to a new digital age where indie labels and DIY bands thrive.

While many of the top executives he has worked with over the years have shifted gears as casualties of the endless changes, the multi-faceted behind the scenes force is not only surviving, but thriving in the current environment. After several years as a consultant in the realm of “virtual labels,” the Detroit-bred executive brings his vast wealth of experience and expertise to his new role as President of the Las Vegas based independent label Odds On Records.

Joseph began his association with the label as a consultant to help the company get up and running and is now at the helm of a growing label whose roster includes legendary (and still massively globally popular) duo Air Supply and L.A. based electronic pop band Ultraviolet Sound, whose lead singer, onetime EMI artist Sarah Hudson, is the cousin of actress Kate Hudson.

After years in the multi-tiered corporate environment, Joseph is thrilled to run a smaller company where he can play a direct role in the careers of his artists. Odds On, which has global distribution via E1 Entertainment (formerly Koch Entertainment), is gearing up for new releases by both artists. Mumbo Jumbo, due May 4, is Air Supply’s first studio recording of all original material since 2002; its lead single, the infectious pop rocker “Dance With Me,” hit Adult Contemporary radio in March. Ultraviolet Sound’s debut single “Suck My Kiss” will be shipped to radio in June, two months before the band’s self-titled debut is set to drop.

These unique artists join numerous legends on Joseph’s rich resume. Over the years, working in both New York and Los Angeles, Joseph worked in numerous departments at Warner Bros., including marketing, sales, radio promotion and distribution. Among others, he dealt with everyone from Madonna, Fleetwood Mac, Prince and Rod Stewart to jazz and R&B greats George Benson, David Sanborn and Al Jarreau.

“I’m excited that I am able to bring to Odds On my many years of corporate experience and my recent work as a consultant for indie labels,” says Joseph, who launched his career as a merchandiser in his native Detroit. “I’m pleased to say that I have been able to successfully make the transition from the old music business model to today’s very different world. Many independents these days don’t have the budget or desire to do much more than send their bands on the road and hope they generate interest. But I believe in hiring the best in the business to help us market our artists and promote them at radio and retail.

“Odds On is also very active with internet marketing and social networking,” he adds. “We don’t plan to have a roster of 25 artists. We want to stay small so that we can give them the attention they deserve and not make them part of a cookie cutter production line operation. Our label is about melding together the ideas and strategies that made the old music business successful while bringing in exciting new technology and the opportunities available to us in the modern industry. Air Supply is a legendary group with a worldwide following of hundreds of thousands and global tours every year. Ultraviolet Sound is an L.A. band with a regional following. As you can see, we are open to artists at different stages of their careers…and also different genres of music!”

Wearing what he calls “all the hats” as President of Odds On Records, Joseph is thrilled about all aspects of running the label—from dealing directly with his artists (sans bureaucratic interference) to working hands on with the legal and manufacturing departments.

“All of these aspects present exciting challenges,” he says, “but for me at this point in my career, I’m really most interested in working with innovative, creative people and artists, employees and outside independent contractors of integrity. I especially love the idea of creating partnerships with the artists and being able, for the first time in my many years in the music business, to make the final decisions that can help the label thrive. To be successful, you have to be fiscally responsible and make sure your funds are being utilized 100 percent for maximum results. Our instincts are good and we’re excited about the future here at Odds On Records.”