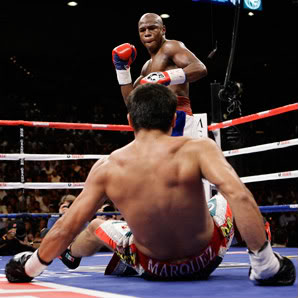 The publicity campaign billed as ” One Returns”, lived up
to its expectations on Saturdays championship fight at the M.G.M s Grand
Arena. Floyd Mayweather Jr.40-0{25KOs} of Grand Rapids, Michigan won every
round of the 12 rounds against Juan Manuel Marquez 50-5-1(37KOs) of Mexico
City, Mexico. In a unanimous decision, Mayweather finished first, maintaining a perfect record with his style and finesse. He danced his way through this fight!

Mayweather, the Six-Time World Champion was too fast for Marquez.
In the second round Mayweather delivered a powerful left knocking down
Marquez, the Five-Time World Champion. There is no denying that Marquez
was in excellent shape and certainly had some great combinations, winning rounds in one, two and twelve. Marquez, no doubt is a tough opponent.
He however could not match the speed of Mayweathers jabs and power punches.
” He’s a tough fighter, and I give him all the respect”, stated Mayweather.

Judge Glen Hamata scored it 114-113for Mayweather. Judge Adalyne Byrd had it 119-109 for Mayweather and Judge Bill Santos scored it117-111.According to Mayweather, he would like to take boxing to the next level. When asked if he would have an interest in Ultimate Fighting he stated” Boxing has been around for hundreds of years. I wish Dana White nothing but success. I’m only interested in promoting boxing. That’s what I’ve been training for since I was a kid.”

Compubox stats showed Mayweather landing 274 punches to Marquez’s 119 and in power punches -189 to 74 for Marquez. So Mayweather will continue to train and looks forward his next fight with
Manny Pacquiao. Although Shane Mosley now wants his shot at Mayweather-
creating a bit of shouting match while Mayweather was being interviewed-
nothing has been decided concerning that fight. The Mayweather-Marquez fight
had a packed house of over 14,000 in M.G.M.s Grand Arena and over 2500 in
the Conference Center for closed circuit. Among those who attended the prestigious fight were Ray jay, P. Diddy, and the governor of California-Arnold Schwarzenegger