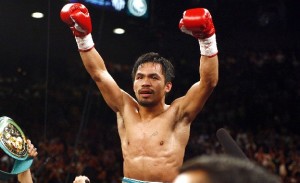 Two fighters with power and heart had the potential for a great fight at the MGM Grand Garden, but it ended fast in round two with a knockout by Manny Pacquiao over opponent Ricky Hatton…

Recently, Manny “Pacman” Pacquiao of the Philippines and Ricky “Hitman” Hatton of Manchester, England entered the ring at MGM Grand Garden to a packed house of over 14,000. No one knew exactly which way the fight would go, but Pacquiao was favored. 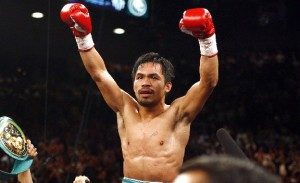 As the referee Kenny Bayless brought the two fighters together, an overexcited Hatton was too anxious. At the bell, he came out charging towards Pacquiao and managed to tie him up, executing some power punches to his head and midsection. That, however, did not faze Pacquiao, who came back with speed and accuracy.

Within a short time, Hatton was knocked down. Surviving the ten count, a frustrated Hatton just didn’t have the defenses he needed.

When round two came up, Pacquiao waited for an opening and caught Hatton with an overhand left connecting to Hatton’s chin. Hatton went down like a demolished building. It was all she wrote and sleepy time for the former champ. In fact, he was out for ten minutes. It all happened by the middle of round two.

A beaten Hatton has lost his IBO and Ring Magazine titles. Hatton felt so badly that he apologized to his British fans. 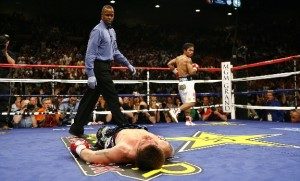 “I’m so desperately sorry for you all,” said Hatton. “I thought I would win, but it went wrong. I’m okay, but I’m so upset for the supporters,” he added.

Like a true gentleman, Hatton congratulated Pacquiao and said he was a great fighter.

“I didn’t see the punch coming. It was a great shot,” Hatton concluded.

Floyd Mayweather Sr., who trained Hatton for 12 weeks but was more of a consultant, commented of the defeat: “He should have kept his hands up better. If you want to talk about mistakes, that was the mistake. It’s something I was preaching and preaching about…”

During the red carpet event at the Hollywood Roosevelt Hotel, Mayweather had recited poetry claiming that Hatton would win the fight. It was all talk.

Lee Beard, the assistant trainer to Hatton, said that he had left the game plan in the dressing room.

“Hatton had promised a new style under the guidance of Floyd Mayweather Sr., but he turned the fight into a brawl,” said Beard, explaining that Hatton started out okay but then got too excited. “And it just turned into a bit of brawl, basically,” Beard said. 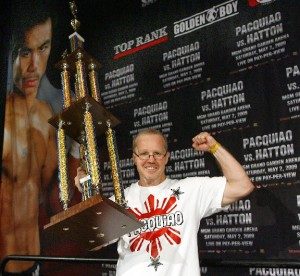 In a special honor for “the world’s best trainer” Freddie Roach, a five-tier trophy was awarded to him after he led four-time world champion “pound-for-pound king” Pacquiao to his victory over Hatton. The trophy’s inscription said: “No. 1 Pound for Pound Best Trainer in the World.”

Every good fighter has a trainer supporting him, and the fight was a contest between Roach and Mayweather Sr., Hatton’s trainer. 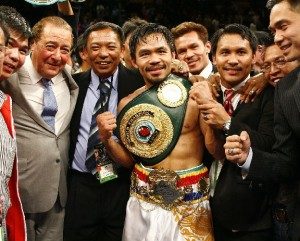 Looking ahead, for Hatton it may mean retirement, but Pacquiao only gets better. The next fight coming up for him is in July with Floyd Mayweather Jr. It should be very explosive. Pacquiao and Mayweather are both swift on their feet and very crafty fighters, which makes good for a competitive fight.

Mayweather Jr. keeps in shape and does not seem to be worried about his upcoming fight with Pacquiao. But, rest assured, he has gone back to the drawing board and is taking the fight seriously.