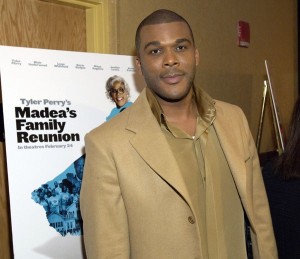 Accomplished writer, actor, director and producer Tyler Perry, was honored with a Brandon Tartikoff Legacy Award in Las Vegas at the Mandalay Bay Resort during the 2009 NATPE Market & Convention…

On opening night in Las Vegas for NATPE Market & Conference 2009, Brandon Tartikoff Legacy awards were presented to actor, film producer and director Tyler Perry and others. The award, given by the National Association of Television Program Executives, marks the careers of television trailblazers. Tyler Perry is an acclaimed writer, producer, actor, director and recently opened a film studio. 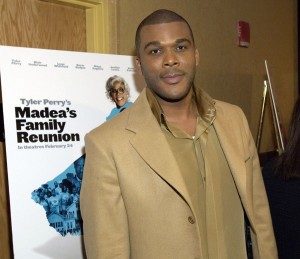 Perry was credited with accomplishing more in his relatively new career than many have in their lifetimes. Recently, Perry opened his own television and movie production studio in Atlanta, Ga.

Perry surprised the audience with his story of how he attended his first NATPE conference more than 13 years ago: “I snuck in,” Perry said, quickly clarifying that he found a pass in the men’s room, enabling him to enter the exhibit hall.

Perry was notably humbled by the award and said he felt honored with the success he’s achieved since his initial visit to NATPE’s conference. He started his career as a writer, garnering the first recognition with his book “Don’t Make a Black Woman Take Off Her Earrings.”

This was Madea’s uninhibited commentary on life and love, which debuted at No. 1 on The New York Time’s Hardcover Notification Bestseller List and stayed on the Top 10 for eight weeks. 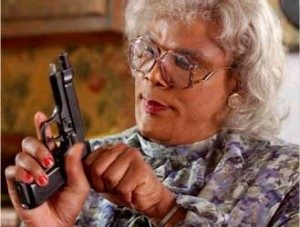 After his success with the book, Perry wrote, directed and starred in several hit movies, one of the most notable was “Diary of a Mad Black Woman,” starring Kimberly Elyse.

His signature character, Madea, is a lovable, wise-cracking, gun-toting grandmother and was introduced to an accepting audience. She has become the brand he is best known for today.

Some of the other movies where Perry, in the role of Madea, has appeared include: “Madea’s Family Reunion” and his new release, “Madea Goes to Jail.”

In recent years, Perry stirred up the airwaves on television with his first-run, syndicated comedy series “House of Payne,” which debuted on TBS in the fall season of 2007. From it, the spin-off “Meet the Browns” came about in 2008.

“I tried to explain my approach to people, because it had never been done before in TV,” said Perry. “The UPN and the WB merged, and a lot of affiliates were left without programming. They wanted something, and I had just finished with 10 episodes of “House of Payne,’ so the timing was perfect,” he added.

“And then here comes TBS—just as crazy as I was. And they said okay, we’ll take a hundred episodes. So, it’s been a fantastic relationship with Dub Mar Mercury and with William Morris and with TBS,” he concluded. 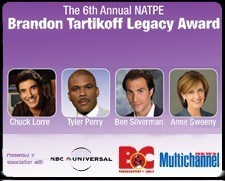 Tyler Perry is a perfect example of how an outsider in Hollywood can think outside the box to get inside the industry and not take no for an answer. Perry didn’t join the system, but rather, found another way around it. And, as he states, if you can’t go through the door, go through the window.

The other award recipients were honored for their successes: Ben Silverman for his work as NBC chief, Chuck Lorre for creating “Two and a Half Men” on CBS, and Anne Sweeney for overseeing ABC Television Network and Disney ABC Television Group.

Although the attendance and the number of exhibitors was smaller than at past NATPE tradeshows, the seminars were most informative and deals were made just the same.