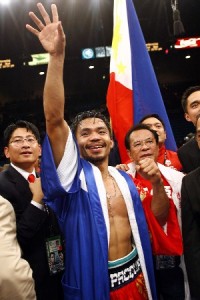 The anticipated “Dream Match” in Las Vegas, Nev., at the MGM Grand was just that, but only for Manny Pacquiao who defeated Oscar De La Hoya in eight rounds with punishing blows and impressive speed… 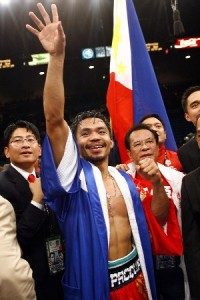 Promoter Bob Arum of Top Rank (who used to promote De La Hoya until he decided to start his own company, Golden Boy Promotions, to promote his own fights and others) had to be elated when Pacquiao, who fights for Top Rank, won a TKO.

I was sitting at the big screens at the Hawaiian Tropic Zone in the Miracle Mile Shops inside the Planet Hollywood hotel-casino. Although it was a packed house there, it didn’t match the sell-out crowd at the MGM Grand (It took only one hour to sell out all seats.)

This was a fight where age competed against speed and youth.

De La Hoya, a ten-time world champion, looked very stiff at the opening of the fight. Pacquiao, on the other hand, was very agile and started scoring right away with rights and lefts. In fact, De La Hoya hardly used his left hook at all. Pacquiao, a southpaw, was just too fast.

In the seventh round, a bewildered De La Hoya received some heavy blows and combinations putting him up against the ropes. Pacquiao landed 170 punches in that round alone; De La Hoya landed only 46. Pacquiao had more than overpowered his opponent.

In the earlier rounds, De La Hoya looked better, but he still lost every round. The Golden Boy had taken a beating to his left eye, and at the point when it was time to come out at round eight, he quit. 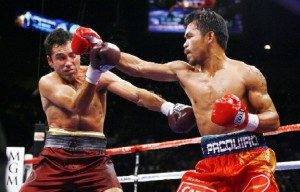 Freddie Roach, Pacquiao’s trainer, said before the fight that he thought his fighter would take out De La Hoya somewhere around the sixth to eighth rounds.

De La Hoya’s trainer, Ignacio “Nacho” Beristain, mentioned that his fighter was in the best shape of his life, but did state his concern about the weight loss he underwent to meet the welterweight class.

De La Hoya, although a strong fighter, is limited in his ability to move around the ring. He’s more of a straight-on fighter. Pacquiao’s skills are versatile. He lands punches to the body or head and can move any way he leads. And he is so fast. With his natural left hand he scores consecutive punches, but changes immediately to using his right equally well.

And so the perfect dream match showed that a young Pacquiao has speed and endurance giving him the advantage. While the veteran De La Hoya could hit hard, he just couldn’t score enough punches, nor did he have the speed.

“It’s going to be a great honor for me in the Philippines,” Pacquiao said after his win.

In the interview afterwards, Pacquiao was very humble and polite when asked about his victory, especially when he was asked about his historic ability to best most Mexican fighters. He complemented his opponent and said it was about the sport and nothing personal.

On one of the undercards, a victorious Daniel Jacobs (12-0-0, 11 KOs) of Brooklyn, NY, fought a hard-hitting, middleweight bout set for eight-rounds against Victor Lares (14-3-, 3 KOs) of Corpus Christi, Texas.

Jacobs knocked out Lares quickly in the second round. Jacobs had a hard left, which he executed in that round, causing Jay Nady to stop the fight at 2:44.

Remarkably, another two other fights were stopped short in round two. Juan Manuel Lopez. 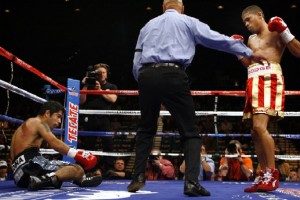 Lopez overpowered Medina, knocking him down three times, using mostly a left hook. Medina simply didn’t look like he was prepared to fight. He just didn’t have the heart or the endurance. Joe Cortez ended it all at 1:38 of the second round.

Resto went down when Ortiz executed a left sending him down a second time. Russell Mora stopped the fight in the early half of its second round.

Overall, it made for a short fight night in Las Vegas. The crowd was still very pleased with the fight card, especially when everyone could say they witnessed Pacquiao beating the best-known fighter in the world.