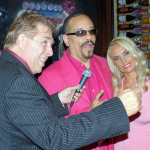 Players Toast celebrates new choices, new visions and a change in lifestyle from then to now, as exemplified in the life of rapper-turned-actor Ice T, who hosted the event along with his wife, Coco…

In Las Vegas, a gambler is considered to be a player, but in other lifestyles, there are those individuals who are considered playboys and those who play the “game of life.” Whatever the case may be, the fifth annual Players Toast, held at the Hawaiian Tropic Zone in the Miracle Mile Shops at Planet Hollywood on the Las Vegas Strip, pays tribute to those other players — especially those who went on to make a positive difference in a new way.

The awards show honors the often-flamboyant recipients for their forward growth and accomplishments in fields like business, community, youth support and other endeavors.
Such was the case recently when Michael “Dr. M.C.” Carter, the founder of the Players Toast honored minister and entrepreneur Bishop Don “Magic” Juan, real estate tycoon Jerry Rosenberg and businessman Rodney T.

Each year, the Players Toast has the distinct pleasure of having Ice T. and his wife, Coco, host the event. It’s a celebration perhaps of what folks have learned about life, for the most part, turning the wrongs into rights. Most important, according to Ice T, is the gathering of the eclectic set of peer “players,” where everyone gets a chance to network and honor their friends.

Michael Carter envisions the Players Toast becoming a nationally televised event with the help of a major network. His associate, Rick Appling of Rick Appling Films and Mr. Dobie “The General” believes the event has merit, but it just needs a major production company to represent the awards show.
Two observations I made when interviewing Ice T and “Magic” Juan were their career changes.

According to Ice T. , his acting role as an investigator on “Law & Order” has created a whole new life for him, going from rapper to actor. He says his rap career helped him with the memorization skills needed for acting.

Bishop Don Juan said his career changed from a player to a minister and a clothing designer, through the grace of God.

“I went to the best Bible school, and I take my ministry seriously; to reach those in need,” he said.

During the event, there was a special performance by Ice T’s new rap artist, Fedie Demarco.
For more information, visit www.PlayersToastAwards.com.