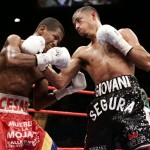 There were three good fights on Bob Arum’s Top Rank fight card at the MGM Grand Garden in Las Vegas, Nev. Perhaps the fight of the year was between Antonio Margarito and Miguel Cotto… 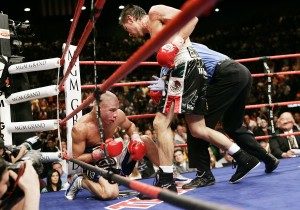 Top Rank’s fight card, held at the MGM Grand Garden on Saturday, July 25, earned Bob Arum praise from fight fans and promoters. It was one of Top Rank’s best fight cards. It made Miguel Cotto (32-1-26 KOs) of Puerto Rico, who was the favorite and a former WBO and IBF champion, suffer his first loss.

It saddened and shocked Cotto. He knew he would face a hard-hitting, aggressive Antonio Margarito (37-5-27 KOs) of Tijuana, Mexico, and that he would have to maneuver away from his body shots in order to win the fight.

Cotto did that in the early rounds, scoring effectively with combinations and power shots to Margarito’s head. What he didn’t do, though, was work on Margarito’s body. 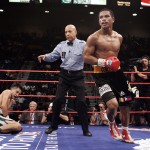 Despite Maragarito’s three-inch height advantage, Cotto had no problem executing the cleaner punches of the two. None of Cotto’s punches hurt Margarito.

In the sixth round, Margarito’s aggressive style of wearing down Cotto by power shots to the body was working as he backed him up against the ropes. And all though Cotto, many times, was able to move out from under Margarito, he received brutal blows while on the ropes.

This went on until the 11th round, when Margarito applied more pressure with a right punch to his head and a left body shot, sending Cotto down on his knee.

For the first time in his 33 fights, Cotto called it quits as his corner threw in the towel.

Margarito was the new WBA welterweight champion of the world.

“It was an accumulation of head punches that took Cotto out of his game plan,” stated Anthony Rodriquez, a fight publicist.

The facts show that Margarito could take a blow, but then he is a devastating hitter that will break down any fighter.

“I told my corner I could wear him down and then knock him out,” stated Margarito. “He never hurt me, but that was the game plan. Cotto was obviously a very strong fighter. By the sixth round, I knew I was getting stronger and could feel him getting weaker,” he continued.

In good sportsmanship, a beaten up Cotto stated: “I am very proud I was able to give my fans an excellent fight. Life continues. It’s not over for me. This night was Margarito’s. He is an excellent fighter. He did his job better than I did.”

In the end, two gladiators fought their hearts out; one, an excellent fighter who could switch up from a southpaw to land many combination punches, while the other could handle getting the shots, but was the aggressor who concentrated on strong blows to the body and head. That’s what Margarito is known for.

Another excellent fight had Bernabe Conception (25-1-1-14 KOs) of the Philippines knock out Adam Carrera (19-3-8 KOs) of Cathedral City, Calif., at 2:14 in the third round of the super bantamweight fight.

In a 12-round interim WBA light flyweight championship bout, Giovanni Segura (19-1-15 KOs) fought an overconfident fight, on his part, loosing to Cesar Canchilla (26-1-21 KOs) by a unanimous decision.

Segura was bewildered in the fourth through the sixth round, giving Canchilla more drive. In Segura’s last attempts in the last three rounds, he did not garner enough points to win.